Tom’s Sporting Life is a work of filial devotion by Tom’s son Mick Carroll. It is compiled in three parts: facsimile reproductions of Tom’s scrap books; recollections and anecdotes by and interviews with Tom; and Mick's notes and statistics to tie it together.

Richly illustrated and well put together it is a fascinating read and not just for football supporters.

Tom’s reflections on his time playing at the highest level, his views on opponents, his thoughts about training regimes and his modesty about his achievements are full of interest and contain thoughts not recorded elsewhere.. But the book also says lots about the history of the 1950s to 1980s.

It is part of the social history of Ganmain and in broader terms of the Riverina and country Australia in general. 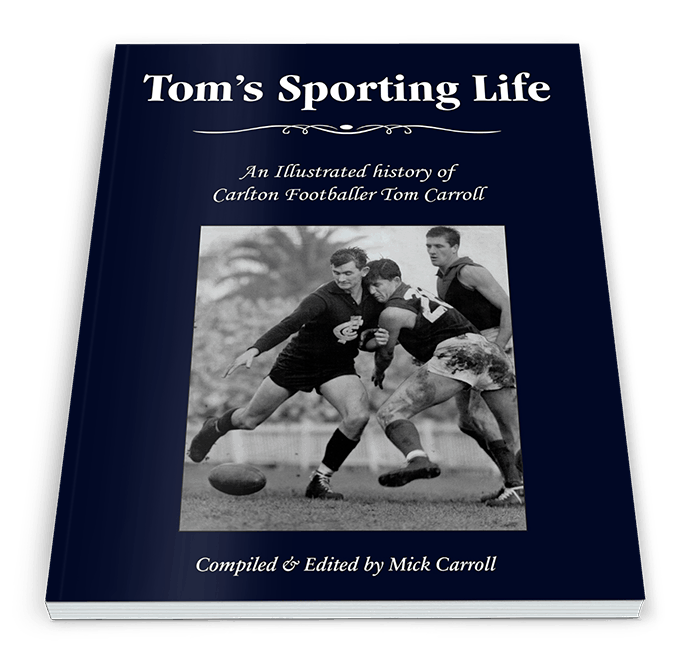 Click the above image for a sample of the book. 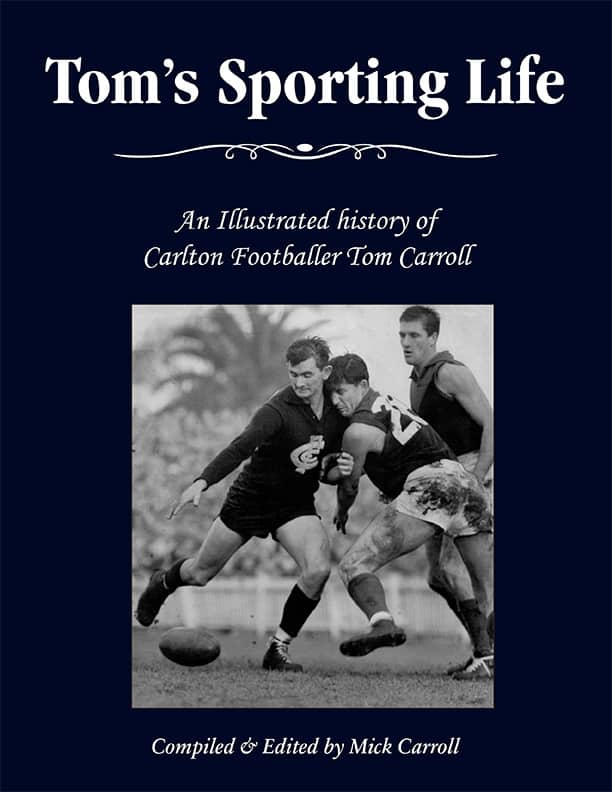 Running at 128 pages the book is a softcover and can be ordered above for $25AU with a credit card. Postage starts at $10AU for the first book.

To save on shipping costs, the book can also be picked up in the Albury-Wodonga, Ganmain, Yarrawonga or Shepparton areas.

Cash payments and direct deposit are also available, but you’ll have to contact us directly using the contact form here and we can send you the details.

You can also email us at books@mickcarroll.ca

If you would like to pay via direct deposit or cash (rather than credit card via the shopping cart) just shoot us a message below and we can email you more details. Postage starts at $10 for 1 book or you can also pick it up locally in Albury, Ganmain, Yarrawonga or Shepparton. You can also email us on books@mickcarroll.ca 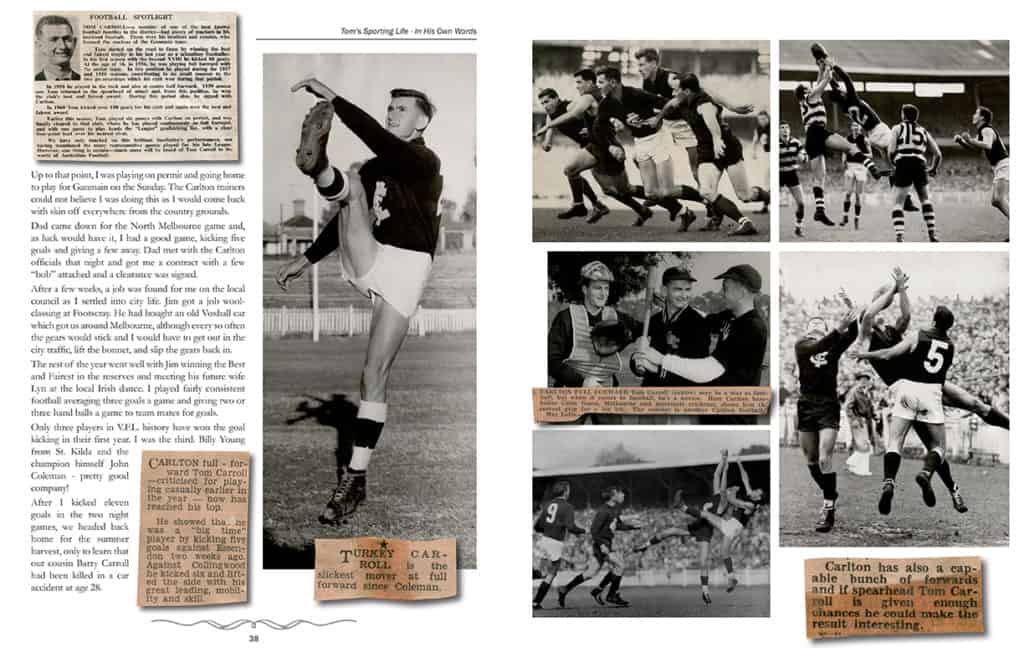 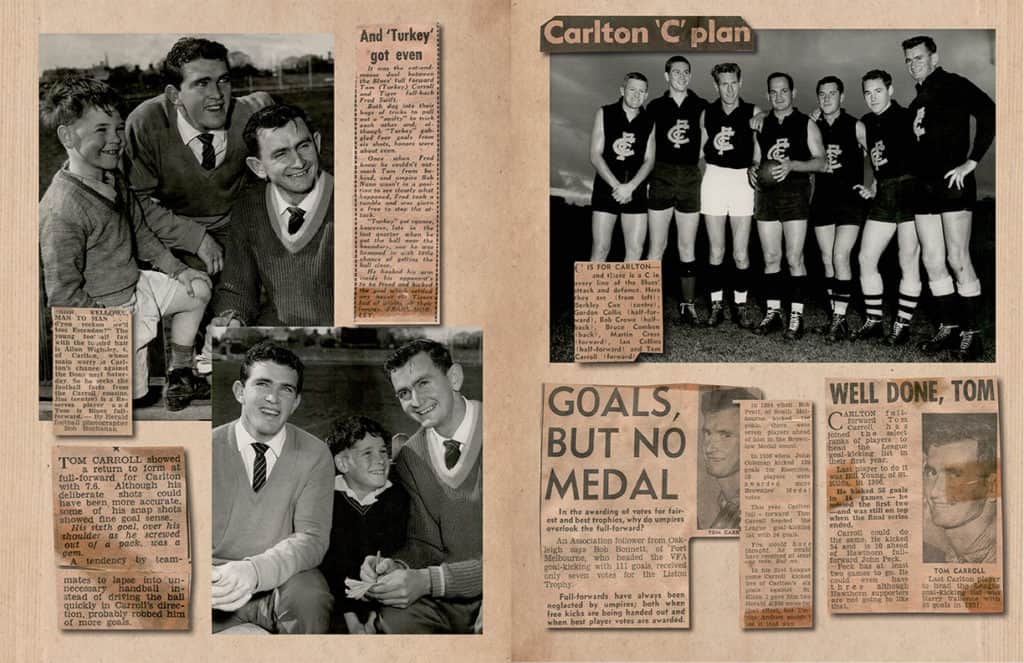 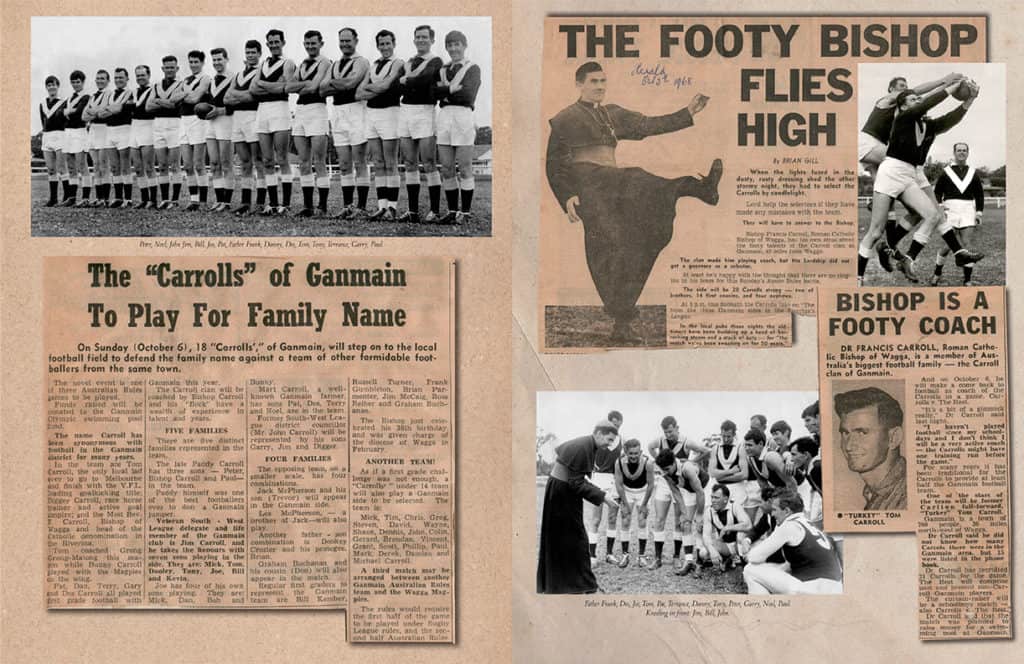 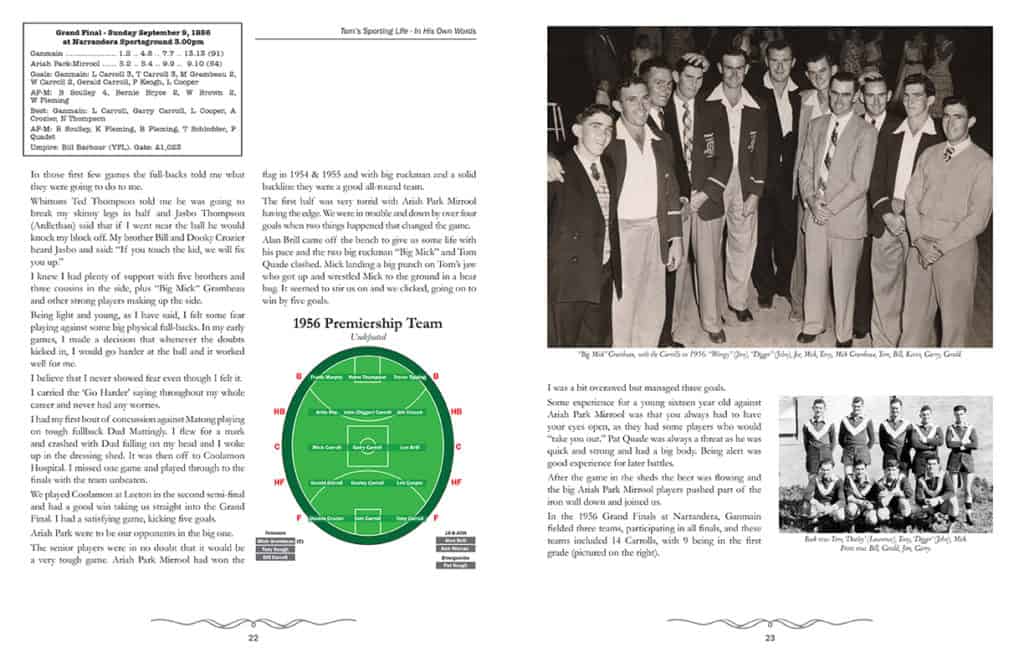 What initially began as an archiving and restoration of Tom’s own scrapbooks and photos, soon turned into a three-year journey and the creation of this book.

Tom (no not the pro surfer!) first dabbled in cricket and basketball before finding his great successes in Australian Rules Football. This book details his adventures with the Carroll family boys at Ganmain, NSW, winning back-to-back Premierships before moving on to the city, Melbourne, to play in the VFL where he earned acclaim as a leading goal kicker with Carlton. After three seasons Tom returned home to Ganmain to become a successful playing coach.

In addition to Tom’s history-making career with Carlton Football Club, this book is sprinkled with plenty of the era’s local history (Ganmain and region) including basketball, football premierships (including the 1964 nail-biter), the ‘Carroll’s versus the rest’ match, Ganmain Grong-Grong Matong under 19’s from the 1980s, plus an interview with Tom covering life in Melbourne and his recollections of the Carlton days.

After the first edition was so warmly received, we decided to expand the book and print a limited run of copies.

Running at 128 pages the book is a softcover and can be ordered here. 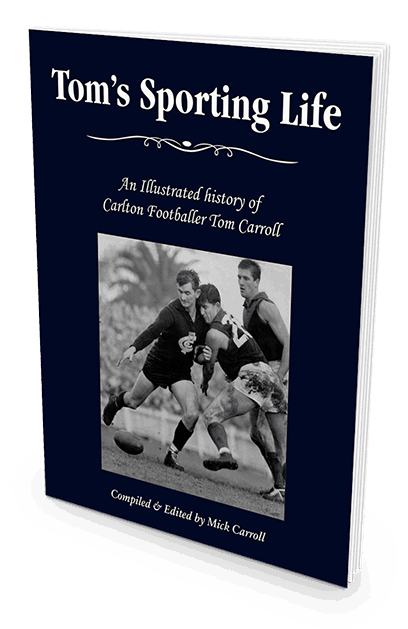 Click the above thumbnail for a sample of the book. 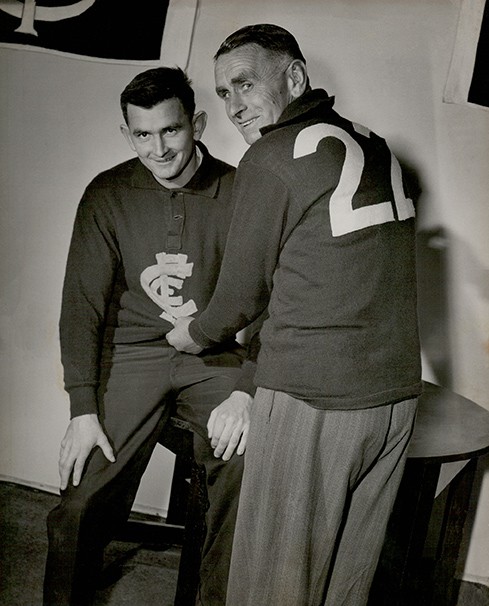 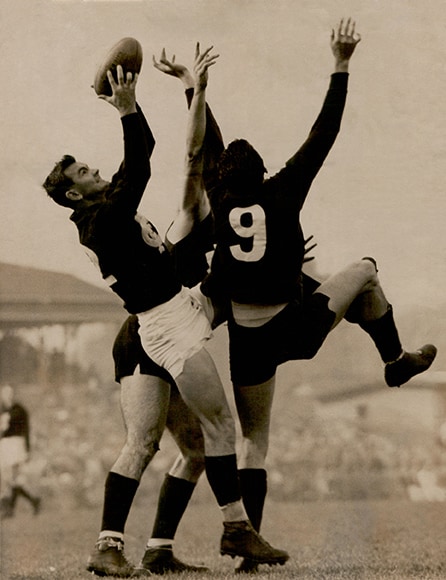 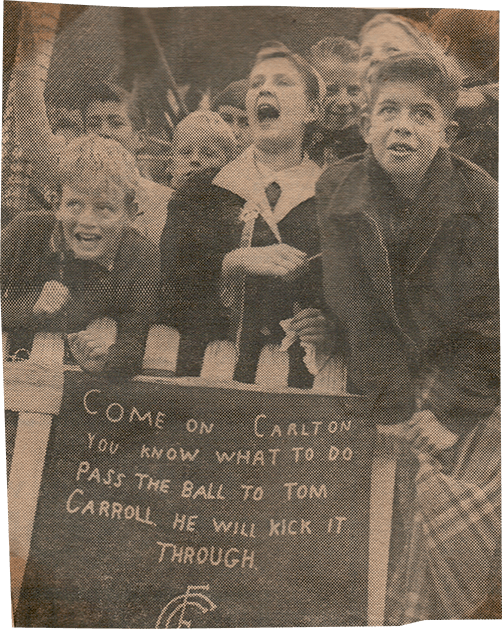 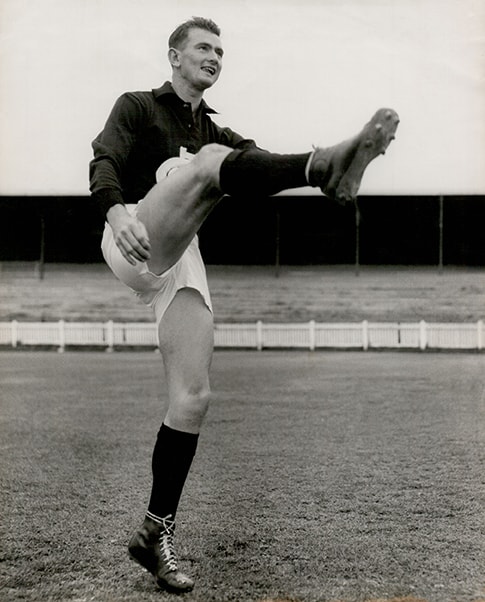 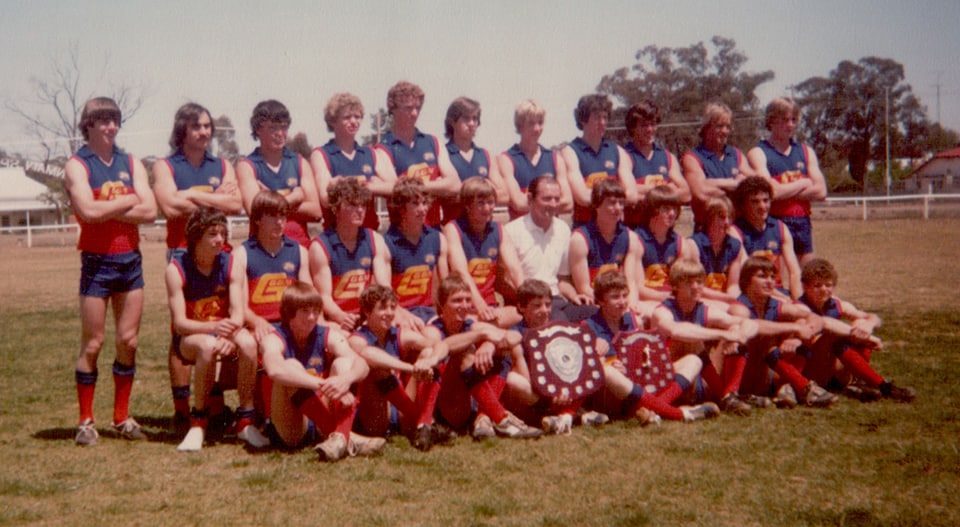 This is a self-published book and is in no way associated with Carlton Football Club, the AFL or any other sporting associations.